Disclaimer: It should be noted that the original interview conducted with Mr. Cházaro, on which this article is based, was carried-out in Spanish. As such, any quotations presented in this article are in fact translations of direct quotes from that interview.

For over twenty-four years, Flavio Cházaro’s career has concentrated on addressing environmental challenges, preserving biodiversity, and promoting the conservation of natural resources in Mexico. He has tackled a variety of environmental issues through his work at the NGO Pronatura and with Mexico’s National Commission of Natural Protected Areas (CONANP). In these positions, he focused on promoting private land conservation and proper management of protected areas, before transi- tioning to his current work in the clean energy sector. Today, Flavio is the founder and CEO of Technoambiente, a solar energy company that sells clean energy to public and private clients. Flavio speaks at a conference on biodiversity and conservation upon winning The BBVA Foundation’s annual award for Conservation Projects in Mexico in 2008.

Flavio first learned of QLF in the mid-1990s. At the time, Pronatura had established an alliance with The Nature Conservancy, and it was through this connection that Flavio met QLF Vice Presidents Jessica Brown and Brent Mitchell, and received a scholarship to participate in QLF’s 1997 Latin America/Caribbean Fellowship Program. The Fellowship proved to be pivotal to his career development, as it exposed him to collaboration of NGOs, the government, and private landowners in New England. “There are so many people engaged in sustainable development,” Flavio reflects. The idea of engaging the local community, as well as businesses and government actors, influenced his work in private land conservation in Mexico. The cross-cultural experience of a QLF Fellowship also helped Flavio immensely in improving his English.

In the years following the Fellowship, Flavio has remained in close contact with Jessica and Brent. “Brent Mitchell and Jessica were always present… as two coaches, two mentors who never doubted that I could achieve this major project [securing a major private land trust] with Pronatura.” QLF supported Pronatura in its early years and stood behind Flavio as he transitioned jobs in 2001 to serve as General Director of the National Commission of Natural Protected Areas (CONANP).

CONANP is a federal agency that seeks to conserve Mexico’s biodiversity and natural heritage through a locally centered, government-coordinated approach to land preservation. Flavio reflects that it is “thanks to the concepts of QLF” that, while he was working at CONANP, they suc- ceeded in securing one million hectares of public conservation lands. During his nine years with CONANP, Flavio received two international awards: a prize for biodiversity conservation from the BBVA Foundation of Madrid, and the Ramsar Excellence Award of Switzerland. The latter award came as the result of his achievement in establishing an internationally recognized Ramsar wetland site in Mexico. He and his col- leagues also worked closely with UNESCO to designate several protected areas as world heritage sites. This accomplishment enabled the organization to expand its protected area projects, ensuring their continued impact on conservation in Mexico. 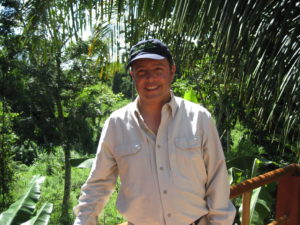 Flavio in a protected area, part of Mexico’s Montes Azules, which literally translates into “Blue Mountains.”

In 2011, Flavio decided to switch gears from protected area management and land conservation, to sustainable energy. He made an entrepreneurial leap and founded his own organization, Technoambiente, with the vision of translating his concern for natural resource management into clean energy solutions for businesses and government agencies. His company is currently developing several photovoltaic (solar) parks that will provide a total capacity of nine hundred megawatts of utility-scale solar energy to the electric grid. These Technoambiente parks will span seven different Mexican states, including Coahuila, Chihuahua, Sonora, Baja California, Jalisco, and Aguascalientes, and promote “the conservation of species and spaces,” while acting as one strategy to combat climate change.

To date, the company has created thirteen park projects, which translates to a total energy capacity of 496 megawatts. With new governmental reforms being implemented in Mexico pertaining to the clean energy market, the future of the field is not currently clear. Despite this uncertainty, prospects are promising for Technoambiente and the company has forged ahead in its endeavors. During the first half of 2015, Flavio and his colleagues planned construction for several parks and attracted foreign investors, including an engineer, to join their efforts moving forward. Technoambiente is forging ahead, retaining their vision to be about “trying to promote sustainability in every sense of the word, and bring it to governments, businesses, [and] communities.” Flavio leads young people around the Montes Azules by boat, sharing his knowledge of protected areas and his love for nature in Mexico.

Throughout his varied professional experiences, Flavio’s career has “always [been] concerned with promoting the conservation of natural capital; always involved in seeking sustainable solutions.” Years after his QLF Fellowship, Flavio reflects on how his QLF experience helped confirm his environmental values. “These values of sustainability, these values of transparency, these values of believing in yourself, which I bring you as part of my personality, were values that were confirmed by QLF, and now in my professional life.” For Flavio, this philosophy and his QLF connection have become “a lifetime commitment.”